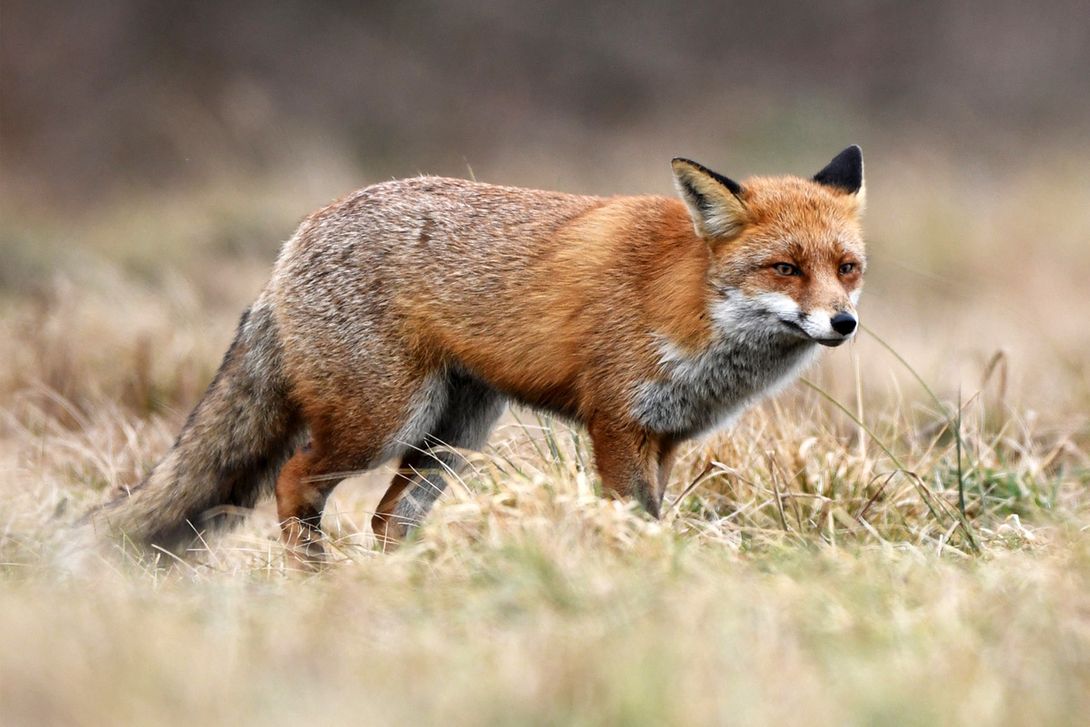 Mouse pipes: All predators and the fox in particular react to the short, clear whistle of the mouse which serves as it staple food. The fine hearing of the fox perceives the whistle in calm conditions up to a distance of more than 100 metres. Depending on temperament, hunger sensations or the wisdom that comes with age, the fox will immediately, even though carefully, steal up to the location of the lure, or approach in a wide arc - in order to get wind or to arrive under cover. Generally, the hunter will only use the mouse pipe if he has set eyes on a fox that is stealing away from him. If he is able to find cover in his vicinity (shrub, thick tree, pile of wood or similar), he will - as quietly as possible - hide behind it and emit the mouse whistles at intervals. For instance:

In order not to let the fox make him hold up a cocked gun for too long, the hunter, if he wants to use shot, should only raise the gun when the fox has come so close to him that it can no longer escape him. Apart from sufficient cover one should make absolutely certain that the wind is good and that the fox does not have to cross the hunter’s tracks.

Hare whistle: One of the most beautiful ways to hunt Old Mr Foxy is luring him with the hare whistle. Barring a few exceptions, only the winter months should be used for this, with snowy conditions promising particular success, especially when the hunter wears a camouflaging snow vest. Apart from nightly lures in the moonlight, the best time for lures are the early morning and late evening. The position from which the luring will take place must be chosen with great care. It must not only leave the hunter enough freedom to move, but also be protected from visibility from all sides. While going to take up the position, special care must be taken in all circumstances that the fox, from the sides he’s expected to approach, does not get near the hunter’s tracks and, in particular, not cross them.

Once the hunter has taken up his position (also a perch, although it is not particularly suitable due to the natural sounding sound oscillations!), he must wait at least a quarter of an hour, before picking up the mewling whistle. Even after 2-3 “mewling series”, he must remain still for a quarter of an hour, because - old foxes in particular - take a lot of time, while considering all safety options, to creep up to the tempting location. The hunter takes up the mewling whistle between his forefinger and thumb, with the closed fingers and the palm forming a hollow open at the front. By lifting and bending the fingers lying closely to each other while simultaneously blowing air into the instrument, the volume and intensity of the hare’s pitiful wailing can be varied in such a way that it sounds deceptively similar. The sounds are amazingly similar to the wailing of an infant. The end of each long and short stave must gradually fade away.

If one suspects the fox is nearby, the sound can be attenuated by holding the hat or the coat’s lapel in front of the instrument. Turning the head to several sides while letting out the wail is recommended. Once the hunter spots the approaching fox, the wailing must stop, except if Old Foxy first sits on its haunches at a distance to consider what should be done now or he is stealing away from the hunter. However, he also often does the latter to get the wind on its side while taking a circular route, thus make it seem to the hunter as though it is uninterested.

One would lure a fox using the hare whistle only on a few days in the year and only use parts of the territory that are distant from each other. There is nothing easier than completely “bewailing” a territory for a long time through lack of care and constant luring.